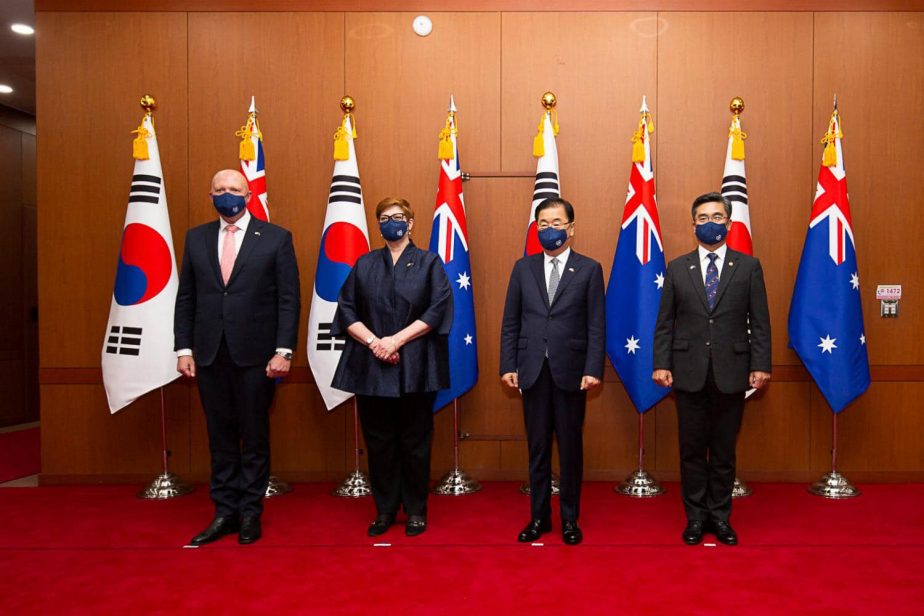 As Australia’s Trade Minister Dan Tehan wrapped up his trip to Asia in late July 2021, his message was overwhelmingly clear: Australia needs to diversify its trade away from China in order to secure future economic prosperity.

What was not as immediately obvious, however, is how Australia plans to do this as its allies in the region press forward with net zero emissions goals that will undoubtedly lead to reduced demand for Australia’s key exports.

Securing a prosperous future in a rapidly changing Asia-Pacific region will require strong relationships between Australia and its key allies in the region.

Australia-South Korea ties are the perfect place to start the deepening of Australia’s relationships with its Asian neighbors.

On paper, South Korea and Australia look like close friends, as evidenced by the “2+2” talks in Seoul on September 13. Both countries are democratic middle powers that adhere to the rules-based international order.

For both, finding a balance in their relationships with China and the United States is a foreign policy priority. Perhaps most strikingly, the two countries’ economies are highly complementary, evidenced by South Korea being Australia’s fourth-largest trading partner.

These key similarities and healthy trade relationship mask the fact that broader engagement between Australia and South Korea is not at all proportional to their mutual economic importance.

Instead, Australia-South Korea relations are astonishingly shallow and tend to focus exclusively on trade and security at the expense of forging a deeper bond. Considering the nature of the challenges facing the two countries, this is a missed opportunity.

The future of this particular bilateral relationship has abundant potential, and more attention should be paid to three key areas in order to expand ties: education, energy, and regional trendsetting.

Between 2003 and 2012, South Korea was the third-largest source country for international students in Australia, behind China and India – in 2004, it actually nudged out India for the number two spot.

But by 2019, just ahead of the pandemic, South Korea had been overtaken by Nepal, Brazil, Vietnam, and Malaysia. The numbers of South Korean international students have also decreased over the past decade, after peaking in 2008 at 28,129.

While South Korea’s diminished ranking and numbers may reflect a shift in South Korean parents’ perceptions of Australian higher education – or simply be a byproduct of its declining birth rate – it also highlights a failure by Australia’s tertiary sector to attract more Korean students.

Instead, Australian education institutions are choosing to focus almost solely on Chinese demand. Ongoing disputes with China over the origins of COVID-19 and trade practices have brought into question the long-term sustainability of a tertiary education sector that is heavily reliant on mainland Chinese students.

There is more work to be done for diversifying international student populations in Australian institutions that fail to reach out to South Korean students.

On the other hand, over the past years, there has been growing interest in the Koreas within the Australian higher education sector. Domestic Australian students show keen interest in Korea, demonstrated by the increased number of BA programs and courses in Korean Studies in major Australian universities. In 2019, for example, when the University of Melbourne opened its first Korean language class, it attracted more than 500 students, surpassing the number of students enrolled in beginner classes for Chinese, French and Spanish. In addition, many Australian research students are graduating with more specialized theses on Korea, ranging from security and arts to migration and environmental studies. As a source of critical people-to-people links and strong potential for future skilled migrants for Australia’s economy and society, it is important to recognize the need for deeper exchanges through higher education and research collaboration.

Another critical area for future growth in Australia-South Korea relations is clean energy technologies. South Korea’s move toward net zero emissions presents a prime opportunity to deepen Australia-South Korea ties. The country’s interest in green hydrogen as a form of clean energy has opened up vast opportunities for Australia to export the gas, which former Australian ambassador to South Korea Bill Paterson rightly notes would allow Australia to remain South Korea’s principal source of imported energy into the future. Proper establishment of a clean energy trade between the two countries would not only present opportunities for a deepening of bilateral relations but could also form the basis of Australia’s next economic transformation, with increased federal support for a clean energy transition and the expansion of hydrogen supply networks.

Establishing a South Korea-Australia clean energy corridor goes hand-in-hand with the ability of both countries to set regional trends.

Predicated on strong economic performance and ties between the two countries, green hydrogen trade presents an opportunity for Australia and South Korea to dictate the terms of Asia’s new economy and establish new nodes along the energy corridor that encourage other Asian nations to participate.

This offers Australia the chance to leave behind its reputation as a climate change laggard and instead function as a trailblazer in the region that provides avenues for other countries to restructure their economies for the 21st century.

The economic incentives associated with a clean energy corridor would also provide South Korea with an impetus to co-initiate the global demand for clean energy together with Australia, which was notably omitted from the Moon administration’s New Southern Policy in favor of focusing more heavily on collaboration with Southeast Asia and India.

This year marks the 60th anniversary of Australia-South Korea diplomatic relations, and new opportunities for deeper collaboration between the two nations have never been greater.

For too long, the shallow, lazy, and superficial relations have guided this friendship. The default context for the middle power collaboration has been the two countries’ shared positions as U.S. allies in proximity to a rising threat of China, in both economic and normative terms.

Yet the strategic partnership is moving into new territory and beyond the annual commemoration of the sacrifices of Korean War veterans or young Australians’ liking of K-pop culture.

Friendly smiles at 2+2 dialogues and mutually comforting reaffirmations of their security alliance with the U.S. aside, Australia and South Korea still lack a deeper level of understanding about each other’s history and people through higher education and R&D sectors.

With clean energy technologies emerging as a viable remedy to the ever-present threat of climate change, the two countries can help accelerate the Asian energy transition.

Engaging the many highly educated and talented individuals in both countries will assist in upgrading the Australia-South Korea relationship from abstract national security concerns and toward a more sustainable people-centric regional human security.

Click here to view the original web page at thediplomat.com