Home » Why the class of 2025 is the most selective in Columbia’s history?

Why the class of 2025 is the most selective in Columbia’s history? 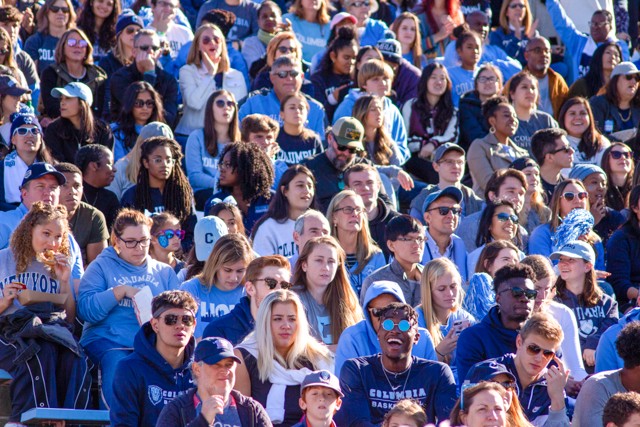 For the 1,569 Columbia College and the School of Engineering and Applied Science first-year students arriving on campus this week, their first steps onto College Walk will represent the end of an application process that has been anything but normal.

After facing the unprecedented academic, personal, and economic impacts of the pandemic, the class of 2025 is the most selective in the University’s history.

During the 2020-21 admissions cycle, 60,551 students applied to Columbia College and SEAS, a 51 percent increase from the previous year.

Jessica Marinaccio, the dean of Undergraduate Admissions and Financial Aid, noted that this spike in applications came in the context of “the appeal of Columbia’s generous financial aid program and the unexpected benefit of moving to all-virtual admissions outreach.”

The office also noted the influence of its test-optional admissions policy, which has been extended into 2022.

The unprecedented number of applicants, also seen at peer institutions, caused the Ivy League to push its joint decision day from its traditional date in late March to April 6.

At Columbia, this decision was made “to most effectively and carefully consider each applicant through its comprehensive holistic review process.”

Admissions experts saw the pandemic-generated changes to the admissions process as an opportunity to lessen the achievement gap, a pattern of first-generation, low-income, and underrepresented-minority students being systemically left out of elite institutions of American higher education.

Research suggests that standardized test scores, for example, are better indicators of a student’s racial and economic background than their ability to succeed in first-year coursework, which the tests are designed to measure.

“Based on research previous to the pandemic, a lot of test-optional research has mentioned that, after adopting a test-optional policy, most institutions saw an incremental increase in their applications, specifically by women, students who are Pell-eligible, [and] underrepresented students,” Sindy Lopez, an analyst at the research non-profit Ithaka S+R, said.

Flores, who is Black and Mexican, was raised in El Paso, Texas, by a single mother and will be the first person in her family to attend college.

Although Flores had studied for the SAT and ACT, pandemic lockdowns made it impossible for her to take the tests before her QuestBridge application was due in late September.

“Whenever we were going to take our SAT, whenever I had my scheduled dates, El Paso stopped testing because El Paso was actually one of the worst cities right after New York; it was literally the hotspot for COVID in the U.S., so all testing locations were shut down,” Flores said.

“So, I ended up just not being able to apply with my test scores, but I was confident in myself and confident that my résumé and my past would speak for myself, even without my test scores.”

While test-optional admissions hypothetically remove the tests’ biases from the admissions equation, applicants still had the opportunity to submit test scores if they were available.

According to Lopez, research suggests that “non-submitters are less likely to be admitted compared to students who had previously submitted test scores.”

In a survey of 548 students admitted to the Barnard, Columbia College, SEAS, and School of General Studies classes of 2025, 70 percent reported submitting standardized test scores despite the test-optional policy.

SEAS first-years had the highest proportion of submitters, with 74.2 percent of the incoming class choosing to submit test scores.

Despite being test-optional, the average SAT score for the Columbia College and SEAS class of 2025 increased for the third consecutive year. It is at its highest, at 1535, since 2017.

Though he was originally hesitant to submit his SAT scores, he ultimately decided to include them with his application at the advice of his college counselor, who had previously worked as an advisor at Columbia.

“The college counselors at my school were sort of pushing students to do it, even though it wasn’t required,” Welch said.

“Their reasoning was that colleges were going to look at whatever you give them and if you can give them a score that makes your overall application better, they’re going to take that into account.”

Although he knew that Columbia and its peer institutions did not require test scores, Welch sat for the SAT twice. The first time, his school administered an “improvised” SAT in the gymnasium.

The second time, New York City had closed all testing centers, so he decided to drive to a town upstate.

Welch acknowledges that his background—the fact that his high school class of 80 students, for example, had access to three college counselors—was a “huge privilege” that others lacked.

“When I got my acceptance at Columbia I [considered] it less my achievement and more like a product of my circumstances,” Welch said.

Despite its small total admittance, at 2,358 students—186 more than the class of 2024—the class of 2025 is the largest in recent years, reigniting discussions surrounding a classroom shortage on campus and facilities falling into disrepair.

Following its financial fallout during the pandemic, the University, which is more tuition-reliant than its peer institutions, may rely on this enrollment bump to help fund its strained operating budget.

And while 19 percent of the class of 2025 is Pell-eligible, a two-percent jump from last year, its share of international students—whose admission is need-aware and who generally receive less financial aid than domestic students—decreased from 16 percent in the class of 2023 down to 13 percent.

Another factor potentially driving the enrollment bump is the unusually high number of students from the class of 2024 who either deferred or took voluntary leaves of absence during the chaotic enrollment process of spring 2020.

Lucas Pasquina, CC ‘25, was originally enrolled in the class of 2024. When Columbia released its last-minute decision to only give housing to students with extenuating circumstances two weeks before move-in, he decided to take a voluntary leave of absence.

“I realized that, at the end of the day, I had to do what was best for me and my family,” Pasquina said.

“We could not pay for Columbia tuition for me to be online and things like that … I had to do what’s best for me, and I’m sure that other students would do the same.”

Instead of spending his first year of college online, Pasquina used the pandemic as an opportunity to do something different.

He worked as a tutor and legal intern to make money before traveling with a group of gap year students to work at a farm in Hawaii and then a hostel in Puerto Rico. Afterward, he took several road trips—one across the United States and one to Canada.

Others saw the pandemic as an opportunity as well: Welch, a classically-trained musician, used the lockdown as a time of reflection and decided to pursue Columbia’s liberal arts education rather than attend a conservatory.

Flores used the flexibility of online school to intern for her local congresswoman.

Click here to view the original web page at www.columbiaspectator.com